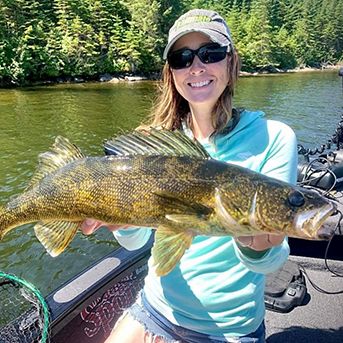 About: Growing up on a small hobby farm in rural Wisconsin, Sara was surrounded by the outdoors and almost every day entailed exploring the countryside where she and her sisters spent hours making forts, catching tad poles, and helping with the animals. It was those experiences that instilled in her the love and respect for nature that has led to a career that allows her to spend as much time outside as possible.

Sara didn't grow up in a hunting and fishing family, and most of Sara's fishing experiences before Tyler, her husband, were limited to an annual family trip to "the cottage" in a remote area of Northern WI. Sara would drag the small row boat down the hill to the lake and spend countless hours there until it was time to go home.

When Sara met Tyler he introduced her to all the different kinds of fishing, and this is where she really began to develop her passion for the fishing and hunting world. Sara completed the hunter safety course in 2008 to be able to go turkey and grouse hunting with Tyler and her passion only expanded.

In 2014, Tyler was approached to manage three Canadian Fishing and hunting resorts in NW Ontario on clear and deep Cliff Lake, and for the past five years, both Tyler and Sara have been Operations Managers at Cliff Lake Resorts.

After appearing on several episodes alongside Butch Furtman, the husband and wife team were asked to co-host and began filming as full time co-hosts for the Sportsman's Journal television series in 2017. The couple brings a dynamic that is uncommon in the world do freshwater fishing television where they share their fun loving antics, fish catching tips, and their adventures throughout the Midwest and Canada.