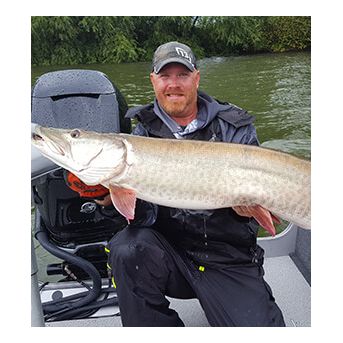 About: Travis still remembers when he was young fishing with his mom, dad and grandpa; one could say that lit the fire that burns today! The sight of the very first musky that followed his lure up to the boat, was like pouring gas on that fire. So you can bet when it comes to open water fishing, he's spent the past 25 years casting baits in waters throughout the Midwest just looking for that next fish, the new personal best, and that world record. This passion also prompted Travis to start his own business (The Hookup Fishing Guide Service), that allows him to take people out to experience and share time on the water, and watch that same fire get lit in others as it is in himself.

Along with guiding, Travis also enjoys fishing in musky tournaments whether its Muskies Inc. chapter tournaments or as of last year, starting to take part in the Professional Musky Tournament Trail. He feels blessed to able to say they took 3rd place in Eagle River, making them top 35 teams of the year to qualify for the World Championship. Travis says the friendships of all these years at tournaments, traveling, guiding, and fishing is what he feel has been the biggest blessing.

The most amazing part of everything he does though is getting kids involved in fishing, and being able to pass that tradition on just as it was done to him. There just isn't anything like that sight of one of his three girls or his fiance, casting 9' rods with giant lures and watching the anticipation in every cast. Musky fishing in his household now is a family affair and he is loving every minute.