There’s something about calm water that makes you pause and reflect.

Along the placid waters of Minnesota’s Lake Darling on a sweltering August day, Bjorn Bloom and Crestliner National Pro Team Member, Bernie Keefe were deep in conversation. Putting aside the Crestliner Dealer Meeting for a moment, they discussed potential changes to the boat that Bernie fishes from: The 1950 Fish Hawk. As an award-winning Colorado fishing guide and professional angler who is no stranger to landing walleye, there was no better person to talk to. After a few minutes of conversation, they turned their attention elsewhere. But, for now Bjorn’s wheels were in motion.

That was over two years ago when he set out on an ambitious undertaking: To improve the Fish Hawk, an industry icon. As a category leader on Crestliner’s product team, Bjorn was tasked with taking the pinnacle of Crestliner fishing boats and somehow lift it higher, but he quickly realized that a boat can’t be lifted alone. Leaning on the knowledge of the product team and his background in consumer insights, Bjorn cast a wide net to gather feedback. Anglers, pros and dealers chimed in with their knowledge, opinions and desires. He recorded them all.

But listening is easy; engaging the feedback and advancing the product is much harder. 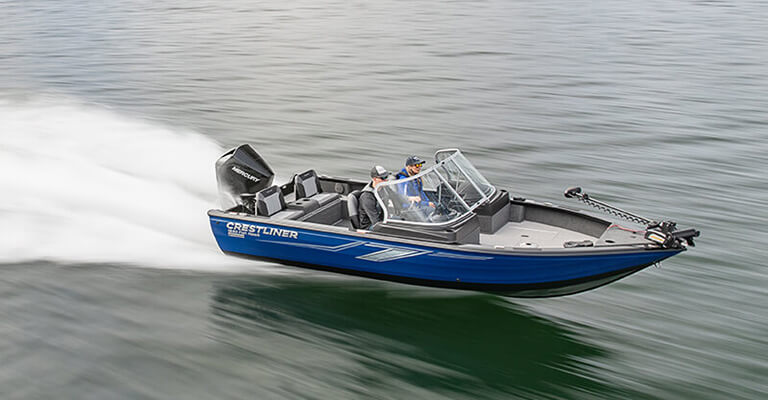 As someone who grew up on the water, fishing and boating, Bjorn knows the impact a boat can have on people. From past to present. A boat is a time capsule. One of the only things that can bind you to the present moment and release you back down memory lane simultaneously.

Bjorn’s head was swimming with possibilities.

Building a boat is not a one-man operation. He would start with the product development team to gather insights from anglers on what to change. Next, he would consult design engineers and work closely with the proto techs to fabricate prototypes and then call on the manufacturing engineers to actually construct the boat. With help from operations, sourcing, finance, marketing and customer service, the final product and all of its assets would become a reality. A lot of hands are required to make changes to a boat.

But as he noted, “Changing something just to change something doesn’t help.” The goal was to make a difference. But different doesn’t mean better. Bjorn knew he needed to be thorough. He and the product development team traveled around the country to gather consumer insights. They talked to people from inland lakes to the Great Lakes, to gauge the pulse of a smattering of multispecies anglers to see what the Fish Hawk needed. And also what it didn’t. The team even heard feedback that said, “Don’t change anything.” That spurred the team to keep the 1650 Fish Hawk Standard Edition in the lineup.

Reminded of his conversation with Bernie Keefe at Lake Darling, Bjorn decided to pick his brain some more.

“You’ve got to update the console”, Bernie said pointedly. “You’ve got to make it look sleeker. That’s the first thing. But then second, is the functionality piece.” Those words resonated with Bjorn. Bernie was asking Bjorn to amplify the fishability by adding room for multiple, larger electronics. So the product development team set out to reconfigure the console to maximize space, and the end result was room for 12” electronics, multiple screens and the Mercury Vessel View option. Now every angler has space for all the electronics they need.

Bernie and Bjorn went on to speak about the customization of the Fish Hawk and adding more horsepower, so a competitive angler with Crestliner’s all-welded strength could gain an advantage to go where others couldn’t and get there faster. But also to keep the integrity of Crestliner’s flagship fishing boat intact. When the team was finished with it, the Fish Hawk would be recharged from bow to stern. 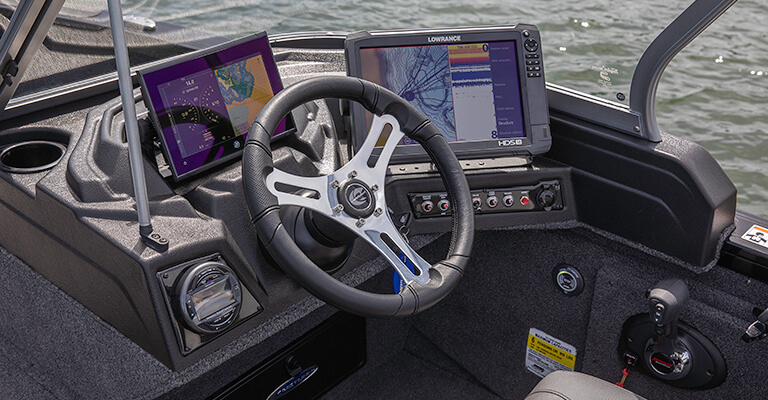 Feedback from dealers and consumers was recorded and implemented over the next year. From Canada, to the East Coast, to the Great Lakes, to the South, there was no stone left unturned. Bjorn personally traveled to the Milwaukee Boat Show and talked with dealer, Cedar Lake Sales. From them he heard where the Fish Hawk was winning.

“You know what? It would be nice to have more seats to take my family out.”

And so Bjorn learned what the Fish Hawk could improve: seating. Dozens of anglers voiced a need for more seating. When he later visited the Green Bay Boat Show and talked with dealer, Ken’s Sports, along with consumers, they confirmed that sentiment.

Two historic Wisconsin cities helped cement one of the biggest additions to the 2019 Fish Hawks: jump seats. The Crestliner product development and engineering team jumped at the chance to add more potential passengers to the Fish Hawk so more families could start creating memories. 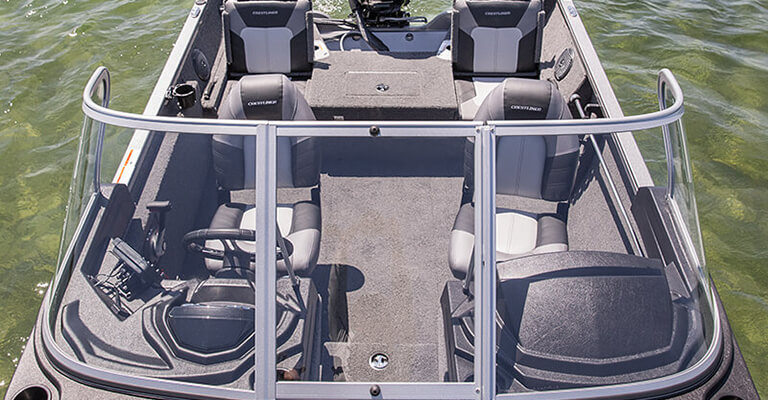 BUILD A 16’ BOAT WITH TWO LIVEWELLS

About a year and a half ago in Indianapolis, during a conversation with The Boat Place another change was born. “If we can have a 16-foot fishing boat with a bow and stern livewell, that would be a hit”. The added fishability of being able to store your catch from anywhere onboard the 1650 Fish Hawk, like its older siblings, was enticing. But, adding a livewell while not losing storage would take some creative thinking from the development team. And they weren’t ones to back down from a challenge. So they resolved to add one.

Anglers and dealers alike asked for higher horsepower ratings, and the engineering team answered. Several Fish Hawks come with a significant boost in performance. The 1850 is now rated for 200 horsepower, the 1750 for 150, and the new 1650 for 115. So now anglers get class-leading power and pinpoint precision in every new Fish Hawk model.

The horsepower, the seating, the fishability, the customization. The 2019 Fish Hawk would bear the same name as its predecessor. But, it would be different. It was a boat that would be engineered by Crestliner, and like the many before it, shaped by anglers.

Bjorn and the team had about a year left until launch. At the close of this initial phase, they felt confident in the information they had collected and felt ready to take action. 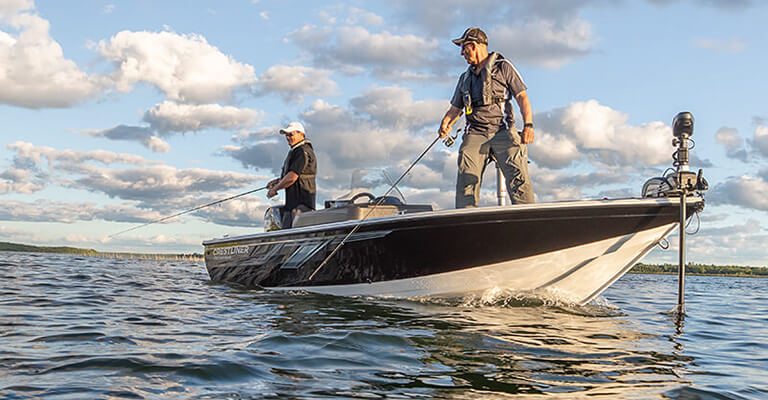 Designing a boat is equal parts dreaming and sweating to make it a reality. A dream means nothing if you don’t reach out, grab it, and make it real. Well, the team had grabbed it. Time to make it real. The product development team starts with the dreams (jump seats, a new console, adding horsepower) and they model the new Fish Hawk at each length to start making them a reality. Easier said than done. Every boat is modeled by the design team through CAD (Computer-Aided Drawing) design programs to see what’s possible. And then remodeled. And remodeled again. And, well, you get the point. 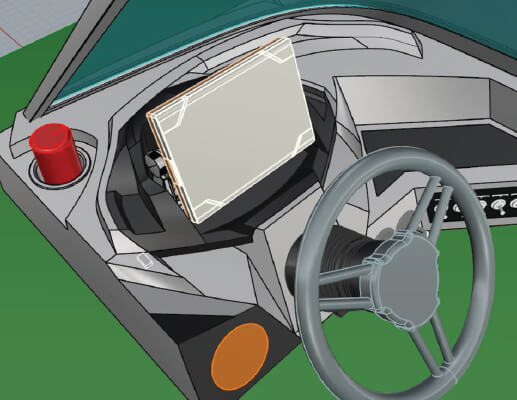 Take adding seats for example. It seems easy, but for Bjorn and the team, jump seats took several iterations to place correctly on the Fish Hawk without sacrificing storage space or comfort. Sometimes, creative solutions had to be implemented. Like adding 3 inches to the 1850 and 1750 models to maximize comfort and legroom for passengers. And, as it turns out, those extra 3 inches allowed the team to increase the horsepower rating to the levels they wanted.

Reconfiguring the console took some time. When you change the console, there are considerations: Like changing windshield height or how it’s installed and mounted. With those considerations in mind, finding the right balance of space that consumers were looking for took data collection, identifying key insights and about a dozen different designs until prototypes would be created. Even then, it would take multiple prototypes until the product team had a dash configuration that anglers would be happy with. 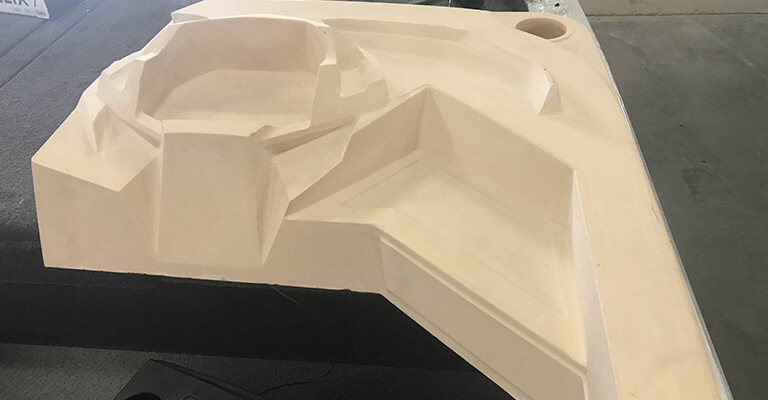 When a design has been approved by everyone for functionality and aesthetics, and the prototyped portions are approved, it’s time to build a boat.

Once engineers construct the new Fish Hawk, the boats are tested in tanks inside the manufacturing facility to ensure there are no leaks or unforeseen issues. After the new designs meet the standards, they are rigorously tested on a nearby lake to make sure everything is operating as it should.

When the on-the-water test passed, the green light was given. The new line of Fish Hawks was ramped up to full production, and they are ready to hit the water. 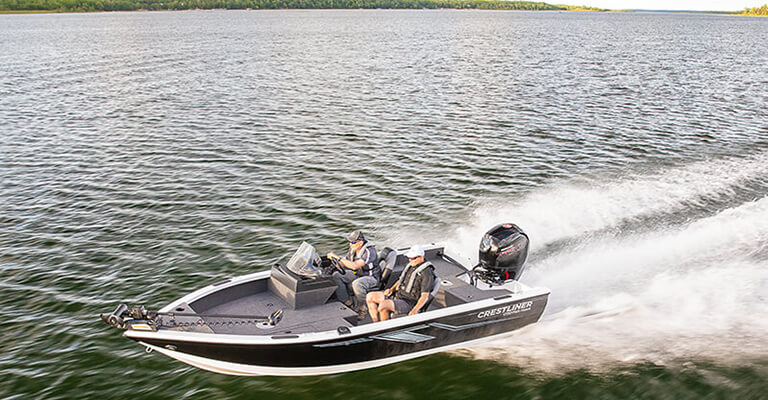 Bjorn and the team worked tirelessly for over two years to elevate the Fish Hawk. And if you look close enough, you’ll see angler feedback all over it, taking the iconic Fish Hawk another step higher.

When asked if he would change anything about his process, Bjorn responded without hesitation, “No”. All the travel, all the conversations, all the designs and redesigns, were all worth it. He had a hand in shaping a product he hopes anglers will love. One that will stand the test of time and set the standard all other fishing boats are measured against.